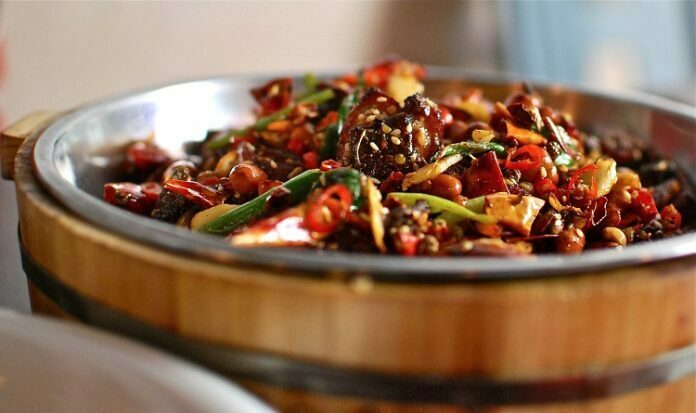 When Westerners think about authentic Sichuan food served in China, they often conjure up images of a dish so spicy that it can bring tears to people’s eyes. While it’s true that Sichuan dishes are spicy due to an ingredient called mala, it’s appeal goes far beyond its hotness.

Sichuan food served in China gets its name from a province of the same name in the southwest region. People native to China’s fourth-largest province tend to favor using spices and garlic as well as Sichuan peppers to give the dishes the mouth-numbing hotness they are famous for worldwide.

The reason the Chinese originally created the dish so hot was to have food available that kept them warm while keeping moisture and cold at bay. This makes sense considering the climate of Sichuan is damp, foggy, and muggy. While chili peppers are a mainstay of Sichuan food today, they did not exist in China until they received them as an import from the Americas in the 16th century. Some ingredients that original preparers of this dish used before chili peppers included betel nuts and ginger roots.

Most Common Ingredients in Sichuan Dishes

Those who wish to duplicate the taste in other parts of the world need to go shopping for some basic ingredients first. Chiles are the most common ingredient when making a modern Sichuan dish. They can be eaten fresh or cooked and then eaten dried, fermented, or pickled. The plumper and shinier chilies are called chao tian jiao while the milder and longer chilies are called er jin tiao. People east the second type most often in either the dried or pickled form. Other ingredients that make for flavorful Sichuan cuisine include:

Examples of Sichuan Dishes to Prepare and Eat Outside of China

Westerns who are not accustomed to this style of cooking should first prepare vegetables that are both dry and fried. Green beans are a popular choice. Cooking them with minimal oil or even no oil will ensure a crunchy taste. The next step is to prepare seasoned water to poach the fish. The goal is to have soft-fleshed fish to pair nicely with the crunchy vegetables.

As for dishes to prepare, fuqi feipian is a cold appetizer with offal and braised beef covered by a fair amount of chili sauce. As a meatless alternative to fuqi feipian, chuanbei liangfen includes even more chili sauce along with clear cold noodles and jelly. Chung pao chicken, a classical favorite, includes chilis, peanuts, vegetables, and Sichuan peppercorns.

These are just three options adventurous eaters have to expand their palates and realize there is so much more to Sichuan food than the initial shock of the spiciness.

Cooking Tips – 7 Helpful Cooking Guidelines To Help You For Amatuers

Derek Iwasiuk - August 27, 2022 0
While cakes are the star of the show in any cake shop, there are other delicious items to be found. From cookies to pastries,...

foody-goody - August 1, 2022 0
Are you looking for ways to improve your lifestyle?Sometimes, even small changes can make a big difference, so let’s take a look at some...

Derek Iwasiuk - July 30, 2022 0
When planning a corporate celebration, ordering a cake is often the easiest and most convenient way to ensure that everyone can enjoy refreshments. However,...

Derek Iwasiuk - July 30, 2022 0
There are many surprises that you can find in a cake shop. Whether you are looking for a specific flavor or something a little...

3 Hotel Recommendations In Batam For Holiday

Derek Iwasiuk - April 1, 2022 0
Batam is a place of industry and tourism, with many visitors, both local and outside the region, to international. Batam is also close to...

Bake Me More Than A Cake

Welsh Pork: Perfect for Many Recipes

Turning Your Party to a Real High Tea Party

The Best Weekend Pub to Unwind and Enjoy