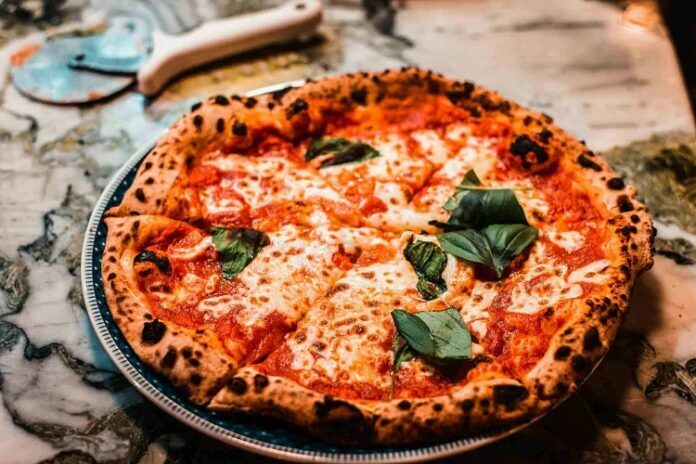 Pizza is an Italian dish of thinly rolled bread dough crust usually baked with tomato sauce, cheese, or other toppings. It’s a snack that comes in triangular-shaped slices, forming a big circle that comes in a square-shaped box. Enjoyable snack, wouldn’t you say? Another fascinating thing about this snack is how much it reminds us of the Cinderella story. You see, just like Cinderella, Pizza was that ill, impoverished food that nobody wanted; nobody wealthy anyway. But along the line of history, it met with Prince Charming, and today, it is not only eaten by rich people, but it is also one of the most coveted finger foods of the modern world.

Pizza evolved from similar flatbread dishes in Naples, Italy, and in the early days, it was a symbol of poverty. It served as a simple and tasty meal for those who longed for cheap food that held their stomach or those who were often on the road; it was made with inexpensive and easy-to-find ingredients and was sold by street vendors. The simplest kinds were topped with garlic, lard, and salt, though others had caciocavallo, cicinielli, or basil toppings.

Owing to its origin, pizza was scorned by food writers and foreign visitors for a long time, and we would probably have never come to know this delicious finger food today if Queen Margherita had not eaten it on her royal visit to Naples in 1889 and fallen in love with it. The approval from the Queen gave pizza the breakthrough it needed and elevated it from being food for the poor to one fit for royals. The flavor of pizza she ate and loved had mozzarella, basil, and tomato toppings, representing the three colors of the Italian flag. It was later to be known as Pizza Margherita, named in her honor.

Another factor that fuelled the spread of the pizza gospel was the mass migration of Neapolitans northward in 1930, who ordinarily went with their cuisine. The return of the World War II U.S. soldiers who had an intense longing for the pizza they had so frequently eaten across seas upon returning home from Europe prompted Ira Nevin, a returning soldier, in 1945 to invent the Baker’s Pride gas-fired pizza oven. This invention allowed retailers to bake pizza easily and inexpensively without having to worry about charcoal or wood. After that, taverns and restaurants opened pizza shops.

Then came the demand for ‘convenience’ foods, which prompted Minneapolis Pizzeria’s owner Rose Totino to invent frozen pizza. Frozen pizza was designed to be taken home and cooked at will. It wasn’t until 1950, though, that pizza became ingrained in American restaurants. It slowly spread through New York, New Jersey, and other areas with large Italian immigrant populations. The absolute commodification of pizza started with the advent of the pizza chains. With the growing availability of cars and motorcycles, pizza, alongside other dishes, began to be delivered to customers’ doorsteps. Having won a reputation for speedy delivery in 1960, ‘Dominik’s’ which was later renamed ‘Domino’s, started a nationwide operation.

Following suit, other pizza shops also extended their base abroad. As the saying goes, “Variety is the spice of life,” more variations of the taste of pizza came to light – something different from the entrenched dough base, topped with thin layers of tomato and cheese taste.

Today, the pizza business totals an estimated $46 billion in revenue in the United States, with the top 50 pizza chains earning roughly $27 billion. As of 2019, there were nearly 77,000 pizzerias in the U.S., and Pennsylvania boasts more pizzerias per capita than any other state, having over 4,000 stores. Pizza is now one of the fastest-selling foods globally and a constant feature at parties, get-togethers, and family celebrations. Its quick baking times and taste make it a favorite for palates regardless of cultural leanings with several flavors, toppings, and styles.

The pizza journey is an intriguing one, and many states today have continued to reinvent its style as we know it. Currently, there is hardly a city in the world without a pizza shop or restaurant. The U.S.-style pizza is not left out in this and has taken to making statements with their catchy street style, an exceptional one being the New York street style pizza. We hope that the next time you order a pizza, you can savor the unique historical blend baked into each slice while celebrating with friends and family.

Derek Iwasiuk - August 27, 2022 0
While cakes are the star of the show in any cake shop, there are other delicious items to be found. From cookies to pastries,...

foody-goody - August 1, 2022 0
Are you looking for ways to improve your lifestyle?Sometimes, even small changes can make a big difference, so let’s take a look at some...

Derek Iwasiuk - July 30, 2022 0
When planning a corporate celebration, ordering a cake is often the easiest and most convenient way to ensure that everyone can enjoy refreshments. However,...

Derek Iwasiuk - July 30, 2022 0
There are many surprises that you can find in a cake shop. Whether you are looking for a specific flavor or something a little...

3 Hotel Recommendations In Batam For Holiday

Derek Iwasiuk - April 1, 2022 0
Batam is a place of industry and tourism, with many visitors, both local and outside the region, to international. Batam is also close to...

Bake Me More Than A Cake

Welsh Pork: Perfect for Many Recipes

Turning Your Party to a Real High Tea Party

The Best Weekend Pub to Unwind and Enjoy